This paper describes how to correctly design and optimize a power-line filter (PLF) by decomposing the conducted emissions into their common and differential mode (CM and DM respectively). Using an antual test case as an example, the proposed solution is focused on minimizing the total cost and size of the power-line filter and optimizing its performance. This can only be done after measuring and detecting the dominant mode in the coducted emissions of the device under test (DUT).

Scope of the work

Different strategies and techniques can be used to design a power-line filter (PLF). The aim of this article is to show how easy the design of a PLF becomes when the information about the common mode (CM) and the differential mode (DM) is available. The instrument used for the measurements is the EMSCOPE, an innovate EMI Receiver designed and manufactured by EMZER, that offers the possibility not only to measure the overall conducted emissions as defined in CISPR-16, but to decompose them into the CM and DM as well. This information is fundamental to correctly decide which components are needed to implement the optimal power-line filter for a specific device under test (DUT).

EMSCOPE is a new instrument for EMI measurements that simultaneously combines two EMI-Test Receivers, and thus, can measure either the conducted emissions according to CISPR standards (EMSCOPE has been optimally designed and manufactured to be compliant to CISPR 16-1-1 and CISPR 16-1-2 International Standards for measurements of conducted EMI), or the modal quantities (the common and the differential mode). Furthermore, it integrates a 16-A single-phase dual-port V network Line Impedance Stabilization Network (LISN), two Transient Limiters and all the needed software. All these features make the measurement of any DUT and the design and implementation of its suitable power-line filter easier, considerably reducing dozens of hours in test and error practices. 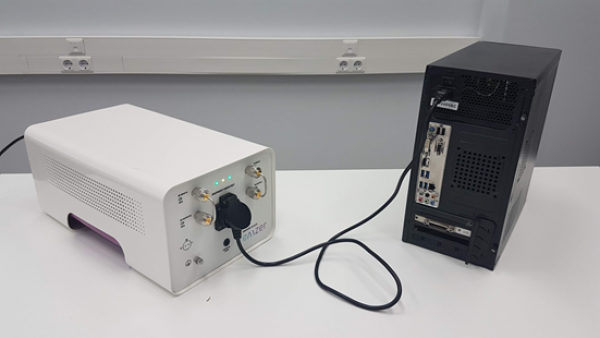 Figure 2. Picture of the DUT and the EMSCOPE.

Figure 3 shows the measured conducted emissions using the quasi-peak and average detectors along with the CISPR 32 class A limits for both detectors. It can be seen that the DUT is not compliant. The average trace is above the limit below 200 kHz due to two harmonics of the switching power supply, and both traces are above the limit again between 2 and 3 MHz. 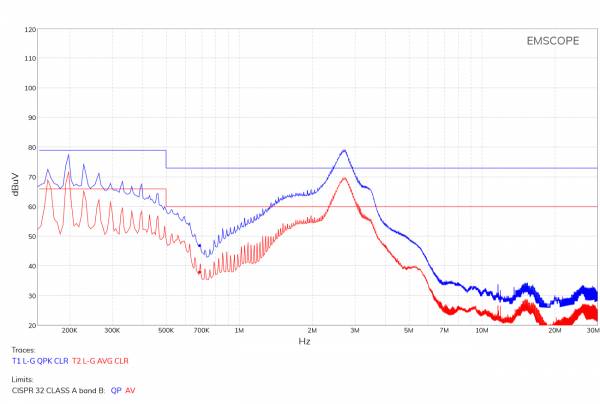 Figure 3. Conducted emissions of the DUT using the quasi-peak and average detectors at Line terminal.

Therefore, the conducted emissions need to be mitigated to make the product compliant. This can be done inserting a power-line filter in the power-line terminals of the DUT. The best place to mount this filter is where the power-line network terminals enter the enclosure, since it prevents electromagnetic field coupling to the filtered power line. If possible, a metal enclosure helps to block any capacitive coupling from the filter input cable and the filtered power line.

Figure 4. Effect of the power-line filter on the conducted emissions coming from the DUT or the PLN.

To clarify these concepts, Figure 6 shows two diagrams that describe the current direction of the differential and common modes. The differential-mode noise flows in opposite directions in Line and Neutral terminals, while the common-mode noise flows in the same direction in the same both terminals, and it is usually generated due to a leakage current flowing to ground via a stray capacitance.

Figure 6. Differential-mode (a) and common-mode(b) definition.

Therefore, since each of the power-line filter components only affect one of the two modal components, it becomes essential to understand the modal nature of the measured conducted emissions in order to design a suitable power-line filter for each DUT. However, all electromagnetic compatibility (EMC) standards define the conducted-emission measurements from line to ground and neutral to ground, and thus, commercial electromagnetic interference (EMI) receivers cannot separate the common and differential mode since they are based on these standard procedures. Therefore, most of the EMC engineers, not having the correct tool to measure the modal emissions, limit the power-line filter design strategy in using a commercial power-line filter that may have provided an acceptable result in previous products or by using a new one after a long and tedious trial-and-error process.

To show the importance of the modal emissions measurements, different power-line filters have been built and placed in a box, as seen in Figure 7. This box is connected between the DUT and the EMSCOPE, and different filters can be tested simply rotating the external switch.

As a first case example, a general power-line filter consisting of a common-mode choke of 2.2 mH and a X-type capacitor of 220 nF has been used. Figure 8 shows the results.

Figure 8. Conducted emissions of the DUT at Line terminal after connecting a full power-line filter using the quasi-peak detector (quasi-peak emissions in blue and C-average emissions in red).

Although this power-line filter allows the DUT to be compliant now with the CISPR 32, it is absolutely not optimal neither in terms of cost, size or performance, which is a significant problem when there is not space enough for the whole power-line filter or when the company commercializes thousands of products to satisfy the demand (the additional cost of an oversized power-line filter is multiplied by the number of products, reaching important amounts in some cases).

However, using EMSCOPE, obtaining the modal conducted emissions becomes really easy, since they are given automatically (thanks to its double receiver structure). Figure 9 shows the measured common-mode and differential-mode emissions using only the quasi-peak detector in the same configuration as Figure 3 (that is, without connecting any power-line filter).

Figure 9. Modal emissions (common mode in blue and differential mode in red) of the DUT without connecting any power-line filter using the quasi-peak detector.

Figure 10. Modal emissions (common mode in blue and differential mode in red) of the DUT after connecting a power-line filter composed only of a single X-type capacitor using the quasi-peak detector.

Figure 11. Conducted emissions of the DUT at Line terminal after connecting a power-line filter composed only of a single X-type capacitor (quasi-peak detector in blue and C-average detector in red).

It can be seen that similar results are obtained using either a complete filter composed of a common-mode choke and X-type capacitor or using a power-line filter composed only of a single X-type capacitor. However, the second one has been obtained after understanding the nature of the conducted emissions with a single measurement, and therefore, it is an optimal filter in terms of cost, size and performance.

This example shows how using EMSCOPE, the only commercial instrument able to provide the measurement of modal emissions, the design of an optimal filter is obtained easily, saving time in the design and obtaining a cheaper final product.

Albert-Miquel Sánchez is the technical director at EMZER Technological Solutions, SL, and manages the design and development of advanced laboratory instruments for electromagnetic compatibility (EMC) measurements. He received his BSc and MSc in Telecommunications Engineering in 2004 and 2006 respectively, and his PhD in EMC in 2010. His experience in project management along with his strong background in EMC research, microwave cirtuits and electronics, allowed him to found EMZER with three other Ph.D. engineers. At present his work makes EMZER a global reference in EMC testing.

Javier Pajares is responsible for the daily operation of the company and is member of national EMC technical comittes. He is an engineer in Electronics (1999) and Telecommunications (2011), Master in Project Management (2001) and Doctor in Electromagnetic Compatibility (2008). Professor at the Ramon Llull University between 1999 and 2011, where he still continues collaborating. His strong technical expertise in EMC and his backgraund in project management permitted him to found EMZER with three other Ph.D. engineers. Nowadays, he works to continuously enhance EMZER as a reference in EMC instrumentation.

Joan Ramon is a Telecommunications and Electronic Engineer with a PhD in Electromagnetic Compatibility, and co-founder of two other technology companies, Sotavia Technologies, SL, and Salutis Technological Solutions, SL. Prior to join EMZER, he was a Professor of the Ramon Llull University between 1998 and 2013 where he imparted electronic measures, radiocommunication systems, Electromagnetic Theory and Digital Communications. He has participated and directed several R&D projects, both public and private.

Iván García is responsible for the programming of the main web interface of the project. He is a Senior Technician in Computer Systems Administration (2008). He worked at various learning technologies projects such as OWL ontologies, IMS-LD based learning systems and Moodle at the Open University of Catalonia (2008-2010) where he also collaborated in various online learning technologies papers. He also worked as a system administrator at the Autonomous University of Barcelona (2010-2017). Since then, he has been working as an autonomous website developer.

Marco Bosi is on charge of developing and manage strategic partnerships to grow corporate business worldwide. He received his Master Degree in Electrical Engineer with Honors from the University of Bologna. His experience to work in an international environment gave him the required skills to negotiate high profitable sales contracts with customers and distributors as well as maintaining long-term relationships. Marco also assures that corporate research meets with future business initiatives to satisfy both customers demand and future trends in the EMC industry.

Jordi Accensi manages the corporation’s marketing and sales. Mission-oriented, Marketing and Communications leader, with over 20 years of experience in the instrumentation trade and a demonstrated track record of developing and executing integrated marketing and communications plans. His Master in Business Administration has helped him to develop creative thought processes and improve his communication skills. He has also worked in leading suppliers of RF and microwave testing equipment such as NSI-MI Technologies, Nearfield Systems Inc and EFI Electronics.