MEASUREMENT AND ANALYSIS OF CONDUCTED EMISSIONS USING THE SPECTROGRAM

All electric and electronic equipment must comply with electromagnetic compatibility standards that limit the amount of interference that they can emit. However, the process to mitigate this interference can be sometimes overwhelming, especially if the device under test presents different modes of operation. In this case, it is needed to find which mode presents the worst-case scenario and if it can cause the test to fail. This becomes a long and tedious process when the measurements are not done with a suitable tool. In this application note, these measurements are done with EMSCOPE, a conducted-emission measurement instrument able to perform fast and agile measurements in the whole frequency band, using its spectrogram function (also known as waterfall function) and combining it with measurements of the common-mode and differential-mode emissions.

Introduction to the Spectrogram function

A spectrogram is a visual representation of the signal spectra along time. The most common format uses one of the two axis to represent the time evolution, and the other one to represent the frequency span; finally, the amplitude of the signal is represented using a color scale, whose legend is usually placed at one of the plot sides. The instrument EMSCOPE, a double channel electromagnetic interference (EMI) receiver, incorporates this function, which has additionally been smartly enhanced to make the detection and solution of conducted-emission problems easier. The user can monitor a DUT for up to 600 sweeps and can recover any of the two-dimensional (2-D) spectra for analysis and comparison purposes with, for instance, a standard limit. Additionally, it can also be applied to common-mode and differential-mode measurements. In order to understand how this function works, two basic examples are presented below.

Figure 1 shows the example of a spectrogram of a 15-MHz tone. In this particular case, the bandwidth of the measurement spans from 150 kHz to 30 MHz (which corresponds to the band B in electromagnetic compatibility (EMC) measurements), as it is seen in the horizontal axis. The vertical axis shows a capture of 15 seconds (slices are obtained at a rate of one per second in this example). A lumpy blue color can be seen in most part of the image, which corresponds to the background noise amplitude, except for the vertical line centered at 15 MHz produced by the sinusoidal tone with an amplitude of 100 dBμV.

Another basic example can be seen in Figure 2, where a pulsed tone has been captured. Instead of a continuous vertical line, as the one seen in Figure 1, the spectrogram shows now a dashed (and spread) line, revealing the pulsed nature of the 15-MHz signal.

As an example, Figure 3 shows the 2-D spectra of one of the slices of the spectrogram shown in Figure 2. Since it corresponds to the measurement done at the time slice -12 seconds, an interval of time where the pulsed signal is active, a 15-MHz tone can be observed. The spectra of this slice, or any other slice of the spectrogram, can be plotted by simply clicking on one of the desired slice points in the spectrogram image. The CISPR 32 Class B limits (QPK and AVG) have been plotted as well for comparison purposes.

In conducted-emission tests, the spectrogram is a useful tool when measuring DUTs that present different modes of operation. Usually, the conducted emissions can vary in each of these modes, and therefore, the EMC technician needs to analyze them and design a suitable power-line filter able to keep the conducted emission levels below the limits in all those cases.

In this Section, an actual DUT that presents two modes of operation (as a simple case that can be latterly extrapolated to more complex DUTs) is tested and analyzed using the spectrogram function. The DUT is a prototype of a microwave oven in the final stages of its design, as seen in Figure 4. The test setup does not require any other instrument than an EMSCOPE, since it integrates the transient limiters, a two-port LISN and the required software (measurements are obtained using a simple web browser and no additional installation is needed; check EMSCOPE User’s Manual for further details).

An initial measurement of its conducted emissions is depicted in Figure 5, along with the CISPR 32 Class B limits for QPK (top line) and AVG (bottom line). Taking advantage of the two receivers present in the EMSCOPE, the QPK and CAVG emissions of both power lines (Line and Neutral) can be measured simultaneously. As it can be seen, the QPK (blue and red lines for Line and Neutral respectively) and CAVG (green and cyan lines for Line and Neutral respectively) emissions of both power lines are above the limit for the whole frequency span between 150 kHz and 8 MHz. Besides, strong amplitude variations are observed from one measurement to another. These variations are caused by the internal magnetron of the microwave oven. This component generates the microwave radiation used to heat the food, and it is the main conducted-emission generator. Since it is continuously turned on and off (to graduate the heating intensity), the conducted emissions of the microwave oven vary in consequence. This behavior is better understood in the spectrogram of Figure 6, obtained using the QPK detector on Line terminal, a dwell time of one second and a total frame time of 200 seconds. 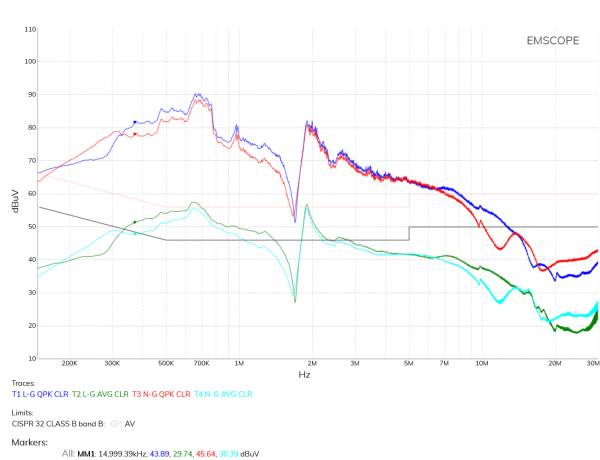 As before, any of the slices can be seen in a 2-D plot. As an example, Figure 7 shows the conducted-emission spectra of the microwave oven at a moment when the magnetron is turned on. As expected, the conducted emissions are well above the limit. 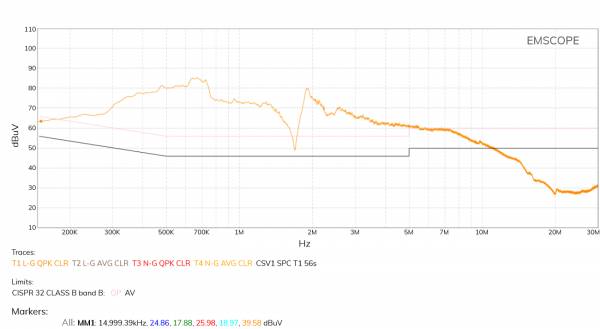 Figure 7. QPK Line emissions at a specific time slice where the cavity magnetron is on.

The worst-case scenario has already been found, that is, when the magnetron is turned on. Therefore, the conducted emissions generated in this mode need to be suitably mitigated to convert the DUT into a compliant one. However, there is not enough information to design an optimal power-line filter yet. Conducted emissions need to be further investigated.

And, for completeness, the common-mode and differential-mode emissions of a time slice where the magnetron is turned on are depicted in Figure 10 and Figure 11 respectively. Although both are above the limit, the common mode is the dominant mode in the whole frequency range, as it was already observed in the spectrogram.

Figure 10. Common mode emissions at a specific time slice where the cavity magnetron is on. QPK detector.

Figure 11. Differential mode emissions at a specific time slice where the cavity magnetron is on. QPK detector.

With all this information, the design of the power-line filter becomes a trivial task. The simplest structure of a power-line filter is shown in Figure 12, which contains a X-type capacitor between line and neutral, to mitigate the differential mode, and a common-mode choke and two Y-type capacitors from line to ground and neutral to ground to mitigate the common mode. A resistor is added to discharge the capacitors when the voltage is disconnected.

The power-line filter designed in this particular case is a simple filter that incorporates a X-type capacitor of 470 nF, a common-mode choke of 1.5 mH, and two Y-type capacitors of 4.7 nF. A resistor of 1 MΩ has been also added. 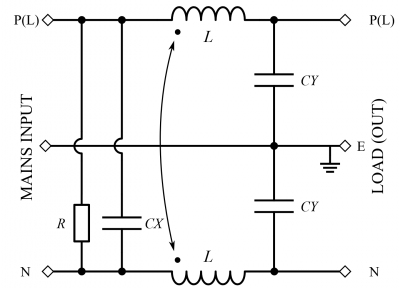 The spectrogram of the microwave oven measured using the QPK detector on Line terminal, after having added the implemented power-line filter described above, is shown in Figure 13. It can be seen that the amplitude of the conducted emissions when the magnetron is turned on has been considerably reduced. In order to check if they are below the CISPR 32 Class B limit for QPK, one of the time slices is plotted in Figure 14, which certifies the suitable mitigation produced by the addition of the designed power-line filter.

Figure 14. QPK Line emissions at a specific time slice where the cavity magnetron is on. Equipment with the designed filter.

A full conducted-emission measurement, obtained with the designed power-line filter, is shown in Figure 15. The QPK and CAVG emissions of both power lines (Line and Neutral) are measured simultaneously. The DUT is now totally EMC compliant with respect its conducted emissions.

In this note, a simple case of a DUT presenting two modes of operation, being one of them not compliant with the CISPR 32 Class B limits, has been analyzed through the spectrogram function of the instrument EMSCOPE. Thanks to the combination of the spectrogram tool with the modal-measurement feature (common-mode and differential-mode emissions), any EMC technician can design a suitable power-line filter to mitigate the conducted emissions in all cases in a straightforward way. This methodology can be easily extrapolated to more complex DUTs that present more modes of operation, considerably reducing the design phase and therefore, the time-to-market of the DUT.

Javier Pajares is responsible for the daily operation of the company and is member of national EMC technical comittes. He is an engineer in Electronics (1999) and Telecommunications (2011), Master in Project Management (2001) and Doctor in Electromagnetic Compatibility (2008). Professor at the Ramon Llull University between 1999 and 2011, where he still continues collaborating. His strong technical expertise in EMC and his background in project management permitted him to found EMZER with three other Ph.D. engineers. Nowadays, he works to continuously enhance EMZER as a reference in EMC instrumentation.

Albert-Miquel Sánchez is the technical director at EMZER Technological Solutions, SL, and manages the design and development of advanced laboratory instruments for electromagnetic compatibility (EMC) measurements. He received his BSc and MSc in Telecommunications Engineering in 2004 and 2006 respectively, and his PhD in EMC in 2010. His experience in project management along with his strong background in EMC research, microwave cirtuits and electronics, allowed him to found EMZER with three other Ph.D. engineers. At present his work makes EMZER a global reference in EMC testing.

Joan Ramon is a Telecommunications and Electronic Engineer with a PhD in Electromagnetic Compatibility, and co-founder of two other technology companies, Sotavia Technologies, SL, and Salutis Technological Solutions, SL. Prior to join EMZER, he was a Professor of the Ramon Llull University between 1998 and 2013 where he imparted electronic measures, radiocommunication systems, Electromagnetic Theory and Digital Communications. He has participated and directed several R&D projects, both public and private.

Iván García is responsible for the programming of the main web interface of the project. He is a Senior Technician in Computer Systems Administration (2008). He worked at various learning technologies projects such as OWL ontologies, IMS-LD based learning systems and Moodle at the Open University of Catalonia (2008-2010) where he also collaborated in various online learning technologies papers. He also worked as a system administrator at the Autonomous University of Barcelona (2010-2017). Since then, he has been working as an autonomous website developer.

Marco Bosi is on charge of developing and manage strategic partnerships to grow corporate business worldwide. He received his Master Degree in Electrical Engineer with Honors from the University of Bologna. His experience to work in an international environment gave him the required skills to negotiate high profitable sales contracts with customers and distributors as well as maintaining long-term relationships. Marco also assures that corporate research meets with future business initiatives to satisfy both customers demand and future trends in the EMC industry.

Jordi Accensi manages the corporation’s marketing and sales. Mission-oriented, Marketing and Communications leader, with over 20 years of experience in the instrumentation trade and a demonstrated track record of developing and executing integrated marketing and communications plans. His Master in Business Administration has helped him to develop creative thought processes and improve his communication skills. He has also worked in leading suppliers of RF and microwave testing equipment such as NSI-MI Technologies, Nearfield Systems Inc and EFI Electronics.